1. The concept of Low-E glass

Low-E glass, also known as low-emissivity glass (Low Emissivity Glass), is a film-based product composed of multiple layers of metal or other compounds plated on the glass surface. The main functional layer of the Low-E film is the silver layer. Silver is one of the substances with the lowest emissivity in nature. Coating a nano-level silver layer on the surface of the glass can reduce the emissivity of the glass from 0.84 to 0.02~0.12. Filter sunlight into a cool light source. The coating layer has the characteristics of high transmission of visible light and high reflection of mid- and far-infrared rays, thereby filtering sunlight into a cold light source, which not only meets the requirements of natural lighting, but also ensures a comfortable room temperature.

2. The difference between single, double and triple silver Low-E glass

1. The difference between the film layers

Indoor comfort: Low-E glass can greatly reduce the heat exchange through the glass in the indoor and outdoor environments, so when the air conditioner is cooling or heating, after the indoor temperature reaches the set temperature, the air conditioner can be on standby for a longer time status, thereby saving power consumption. Not only that, the shading characteristics of Low-E glass greatly reduce the time of using curtains to shade, thus improving indoor light comfort and creating a more transparent and bright indoor environment. To make a simple example, in summer, the effective operation time of air conditioning and refrigeration is 100 days for buildings with ordinary glass, and the effective operation time of refrigeration is shortened to 35 days after using single silver Low-E glass. Or triple silver Low-E glass, it only takes about 30 days or less, further saving electricity bills. In the long run, although the use of double and triple silver Low-E glass increases the construction cost of the project, it greatly reduces the energy consumption cost of the building during its use period, and the later energy consumption can be recovered in a short period of time. the added cost. 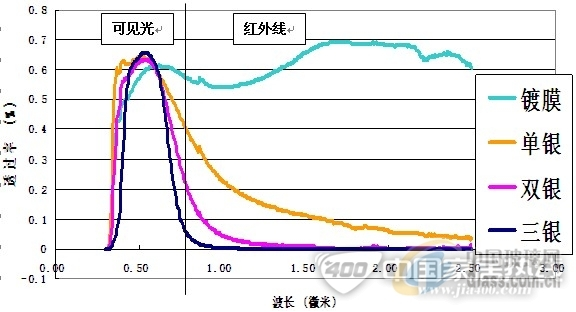 In the total energy of solar radiation, visible light accounts for about 47%, and infrared light accounts for about 51%. Visible light can affect the visual effect of human eyes, and infrared can transmit heat energy. This part of the heat energy of the infrared glass of sunlight causes the indoor temperature to rise, the air conditioning workload increases, and the electricity is consumed. The energy distribution of the heat energy transmitted by sunlight is in the wavelength range of 780-2500 microns (the area on the right side of the vertical line in the figure), and the proportion of this part of the energy transmitted through the glass can be measured by the "total transmittance of solar infrared heat energy".​​

The left side of the vertical line in the figure is the visible light area, and the level of the curve in this area reflects the light transmittance of the glass. On the right is the infrared region, and the area contained under the curve reflects the heat energy directly transmitted by the sun. The single-silver Low-E contains the largest area (only Low-E is compared), followed by the double-silver, and the triple-silver Low-E contains the smallest area, so the thermal insulation performance is the best.

The glass parameters corresponding to the above figure are as follows: