Curtain walls are becoming a popular application for photovoltaic glass in buildings. They allow for owners to generate power from areas of the building they had never thought of. Buildings become a real power plant, keeping their design appeal, aesthetics, efficiency and functionality.

Both amorphous Silicon and crystalline Silicon glass can be used for curtain applications, and choosing one or another will depend on your design preferences, energy needs, and daylight requirements.

PV Glass for curtain walls comes frameless, and it can be assembled into any commercial system. From a mechanical prospective, the glazing contractor will take care of its installation, and then the electrical contractor will interconnect the units.

1. Full-glass curtain wall is fully transparent and all-in-view, and pursues exchange and integration between the inner and outer spaces. People could clearly see the whole structural system of the glass, so as to turn the structural system from supporting role to performance visibility and to demonstrate a sense of architectural aesthetics, type, hierarchy and space impression.

2. The system is light in weight, and features simple selection of material, processing in factories, fast construction and convenient maintenance. Also, it’s easy to clean.

3. For the effect of enriching architectural elevation, this system is unparalleled, and is a perfect embodiment of the modern science and technology in the building decoration.

Cost of facade-mounted PV modules can be partially offset by the cost of the glazing infill they replace. In many places, there are subsidies or tax credits to further help defray first cost. PV power generation can be significant. In one modeling scenario, where facade-integrated arrays were assumed to cover south-facing spandrel areas of a suburban office building, PV power output equal to 25% of the building's lighting needs was anticipated. Most demonstration projects are of a smaller scale. In the US, we enjoy relatively low electrical power rates, so justification of BIPV must be based on criteria other than payback time. As society starts to recognize the long-term costs of emissions from conventional fossil-fueled power sources, this equation will change.

Only one unit-to-unit splice (usually a silicone sheet or patch) needs to be field-sealed, and only one anchor per mullion needs to be attached to the face or top of the floor slab. Interlocking unitized glass curtainwall frame members are weatheripped to seal to one another, both horizontally and vertically. This accommodates thermal expansion and contraction, inter-story differential movement, concrete creep, column foreshortening, and/or seismic movement. Most unitized curtainwall systems are installed in a sequential manner around each floor level, moving from the bottom to the top of the building. 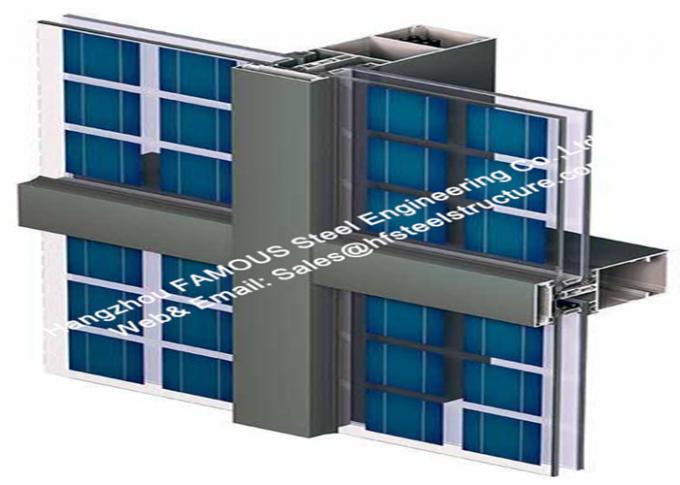 All our pre-glazed façade curtain wall systems are fabricated, assembled and glazed within the controlled environment of our manufacturing facility. This will bring greater quality control and the ability to pre-construct our frame modules before the building’s structure is erected; it’s also very helpful to accelerate the close-in of the building, since our installation team can work on sections of the building as they become available; while minimizing delays due to weather conditions.

Nowadays the unitized curtain wall system have become the preferred method for enclosing buildings, as more building owners, architects and contractors conclude the benefits of this type of construction. Unitized systems allow buildings to be enclosed quickly, which can help to speed up the construction process leading to earlier occupation. The fabrication process for unitized systems is more consistent than for stick-built curtain walls, as unitized wall systems are constructed in almost an assembly line fashion, indoors, and under controlled environmental conditions.